As part of the ongoing multi-million dollar facelift that Etosha has been undergoing over the course of this year, more than 90 staff houses were handed over to the Ministry of Environment and Tourism by the Millennium Challenge Account (MCA) Namibia last week. 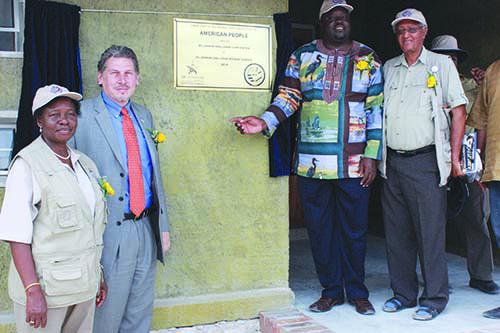 Previously, many of the park’s staff had lived in tents or informal settlements. These staff will now live in the houses, with a view to encouraging greater productivity due to the comfortable, healthy and socially stable residential environment.

MCA completed 37 MET staff houses at Galton Gate and 54 houses at Ombika Gate. The houses are equipped with solar geysers, fridges, stoves, running water and electricity and are said to be easy to maintain.

Land has been serviced to add another 90 houses to this initial number in future, while another 30 houses in the junior staff village at Okaukuejo underwent renovations with a view to improving overall living conditions in the village.

Minister of Environment and Tourism Uahekua Herunga expressed gratitude to the MCA, saying the improved park infrastructure made a significant contribution to the communities in the park. “Increased benefits from wildlife conservation will encourage people around the Park to become even better custodians of wildlife,” he said.

The completion of the new houses was one of the final moves in what has been a significant makeover within Etosha. The makeover also included the construction of evaporation ponds and waste transfer sites at Ombika and Galton Gate to ensure proper management of solid and liquid wastes, as well as upgrades to gates into the park and some of the park’s waterholes.

Overall, the MCA has invested N$350 million in the building and upgrading of infrastructure in Etosha National Park