You may remember some months ago we published a blog about proposed upgrades to Etosha National Park.

Over the past 5 years, MCA-Namibia, with the help of funding from the American governement’s Millenium Challenge Corporation , has invested a massive US$67 million in tourism projects. US$41 million of that investment went towards managerial and infrastructural improvements in Etosha.

A further US$8 million has been invested to enhance the marketing of Namibian tourism and US$18 million to develop the capacity of communal conservancies.

Substantial and somewhat unfathomable numbers indeed. But with the project coming to an end in September and with various milestones having been highlighted at a closing-off event held in early July, what does all of this investment actually mean on the ground?

Within Etosha itself, we have seen the construction of management centres and staff villages at Ombika and Galton Gates, as well as renovations to junior staff houses at Okaukuejo.

A waste management plan and strategy was drafted and there was further provision of maintenance (to roads etc) throughout the park as well as the relocation of various game species.

The gates are also still due a stylish spruce up. Here’s an artist’s impression of what the upgraded Von Lidequist Gate will look like: 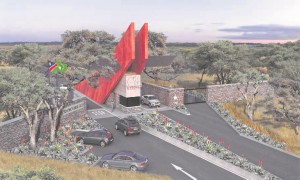 Investment in eco-tourism and community development has also been a key feature of the project.

According to the Deputy Director General of Etosha, Julius-Boas Erkki, “Namibia’s sustained tourism and economic growth is highly dependent on sustainable growth in Etosha”

Overall, Minister of Environment and Tourism, Uahekua Herunga, said that thanks to the funding and the project “internationally the profile of destination Namibia was significantly raised and more tourists were inspired to visit Namibia”.

Earlier this year Namibia was listed as number 6 in the New York Times ‘Top Places to Visit in 2014’.

Book a trip to the ever-improving Etosha National Park and it certainly isn’t hard to see why.