Early in 2013, I wrote an article for The Big Issue called ‘Sounding the Horn’, which pondered why the scourge of poaching that has afflicted South Africa in recent years hadn’t taken hold in neighbouring Namibia, which has the largest population of black rhinos in the world.

A number of factors were discussed. Dr Mike Knight, chairman of the Rhino Management Group noted that Namibia’s rhino population is far more widely dispersed than South Africa’s and have a wider range, which makes them harder for poachers to track. Knight also pointed out that Namibia’s police force is widely considered to be less corrupt and more efficient than South Africa’s; there are a number of reports of South African officials being bribed by poachers.

But more than any of this, the Namibian government has been lauded for their Community-Based Natural Resource Management programme, which, among other initiatives, has helped ensure that local communities have a vested interest in protecting rather than poaching rhinos. As rhino expert Jeff Muntifering puts it:

“Catching poachers is certainly important but, in my opinion, does not address the underlying problems that drive poaching. Strategies that harness local values and institutions to promote pro-rhino behavior are likely to be more effective in the long-term since they seek to change the attitudes, intentions, and ultimately behavior of the people most likely to be exposed to and tempted towards engaging in poaching activity. A critical mass of committed local people working hand-in-hand with law enforcement would be a formidable barrier to would-be poachers and is likely the only measure that will stand up to the relatively huge financial rewards that poaching currently provides.”

However, for all the positives, I ended my article by asking whether in fact it was only a matter of time before the growing demand for rhino horn saw South Africa’s current situation slowly seeping across its neighbour’s borders.

Sadly, the concern I raised then seems to have been well-founded. October 2014 saw the first ever poaching-related rhino death in Etosha National Park. Three more rhinos killed by poachers have since been found in the park. Overall, Namibia lost 24 rhinos (as well as 76 elephants) to poachers last year. While these statistics still pale in comparison to the South African situation (where a record 1215 rhinos were poached in 2014), it is a notable increase from previous years. 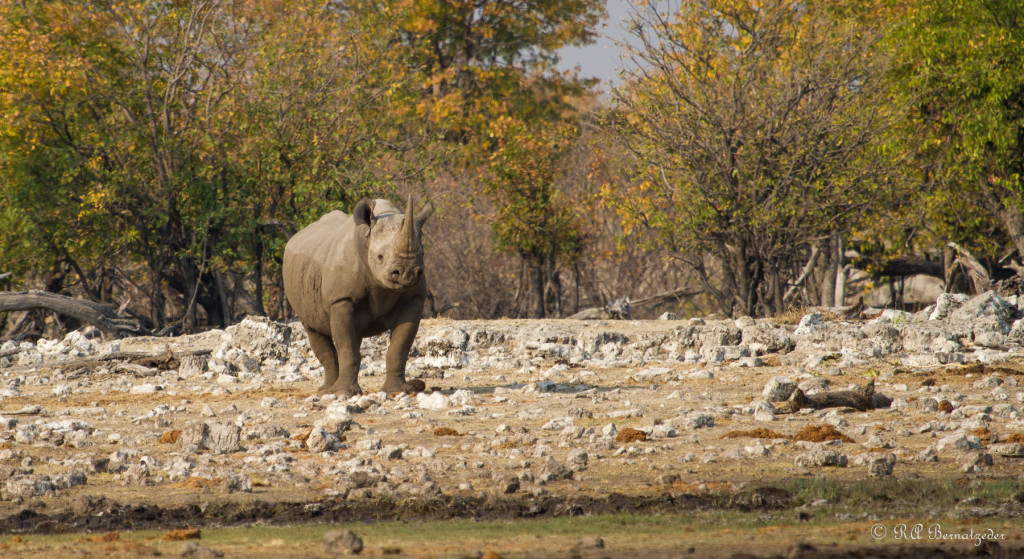 “We all knew in Namibia that we were not immune to poaching and that sooner or later we would be targeted especially as poaching became more difficult in other countries . . . Chinese mining companies are also moving closer into rhino and elephant areas and a number of Chinese have already been arrested under the possession of ivory and rhino horn”.

However, the reaction from the state and local conservationists has been, for the most part, swift and examplary. On the ground patrols are being bolstered, a new 400-strong anti-poaching unit will be deployed in April, new surveillance drones are being launched in the country’s national parks, a large number of rhino are either being dehorned or relocated.

Similar thoughts were shared by South Africa’s Environment Minister, Edna Molewa, in a recent article in the South African Sunday Times, which was entitled “win over the people and we will win rhino-poaching war”. Up to this point, South Africa has largely failed to include communities in conservation in the way that Namibia has, and many feel this is the biggest factor in the discrepancy between each country’s poaching statistics.

So while poaching is sadly on the rise in Namibia, if it continues to be proactive the country can still set an example to the rest of the region in terms of how it goes about tackling the problem of poaching. So it is that for the increasingly common media narrative of “doom and gloom” about Namibia’s rising poaching incidences, the country remains perhaps the greatest bastion of hope for the future of the species.

Let’s all hope it remains that way. And let’s give Namibia and Etosha all the support we can.