Any African wildlife enthusiasts out there will probably know that the black rhino is notoriously shy, elusive and hard to spot in the wild. Unlike white rhino, the black rhino tends to be a solitary animal, and usually prefers dense thickets of vegetation to open plains. Its smaller than the white rhino too, and much rarer. All of this makes a black rhino sighting a particularly special and sought after treat for safari goers on a game drive anywhere in Africa.

But for the residents of Omuthiya, a small Namibian village on the outskirts of Etosha, spotting a black rhino might provoke a very different sort of reaction.

Just a couple of weeks ago, a lone black rhino appeared in the area and began terrorising residents, inflicting minor injuries to a school pupil and an old man.

The councillor of Omuthiya constituency, Armas Amukoto confirmed the incident and said the rhino first attacked pupils and teachers at Nicodemus Nashandi Primary School in the constituency. 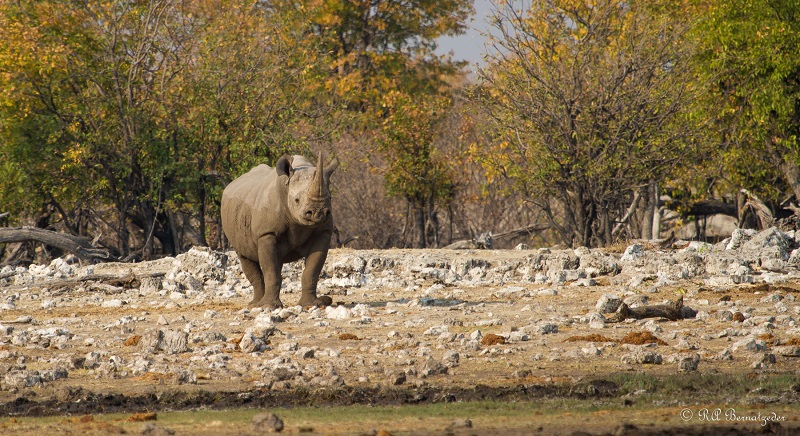 He said the rhino invaded the teachers’ houses at the school, before attacking farmers in the area.

Classes at Nicodemus Nashandi school were suspended for the entire day the following day to ensure the safety of the pupils.

It is believed that the rhino must have strayed from Etosha National Park; Armukoto said that this was not the first time that an endangered animal had been seen in the area.

The rhino was eventually captured by Etosha’s nature conservation officers in the early hours of the morning the day after its brief rampage and returned to its home in the park.

So, a word of caution: black rhino are beautiful and rare creatures and seeing them in the wild can be a truly unique experience, but they are also much more aggressive than the more placcid though bigger white rhino, as anyone in Omuthiya will be able to vouch for. Maybe this particular black rhino just had a very bad case of small rhino syndrome.