The widespread media coverage and international outrage that followed the illegal killing of Cecil the lion by an American dentist has surely taken anti-trophy hunting sentiment to new heights.

Animal rights groups across the globe were quick to use Cecil to push their agendas, however tenuous the links between Zimbabwe’s most famous lions’ death and their own causes.

The general public took to social media to issue hunters with death threats and deride what they see as an inhumane and archaic pursuit. TV presenters broke down in tears. Some model with big eyebrows held a benefit event.  And suddenly, everyone was a lion expert.

Bowing to growing pressure, 20 international airlines have since imposed bans on the transport of hunting trophies on their planes, a move that is being celebrated by wildlife lovers everywhere.

Namibia and South Africa, both of whom have thriving hunting industries, have been urged to follow this lead and ban trophies on their national carriers.

Speaking in light of their current failure to do so, Humane Society International CEO Andrew Rowan said “It’s high time for South Africa and Namibia to reconsider the supposed value of trophy hunting to your economies and the harm it is causing to wildlife populations, the way in which it undermines the rule of law including through corruption, and the vehement disapproval of this activity as demonstrated by the outpouring of conern over Cecil’s killing”.

Rowan and many other hunting critics (myself included) have cited a study by Economists at Large which suggests that trophy hunting contributes very little to overall tourism revenue in nine African countries that allow trophy hunting, and that it also brings minimal benefits to local communities, contrary to the claims of many hunters and hunting operators. Namibia is one of the countries included in this report. 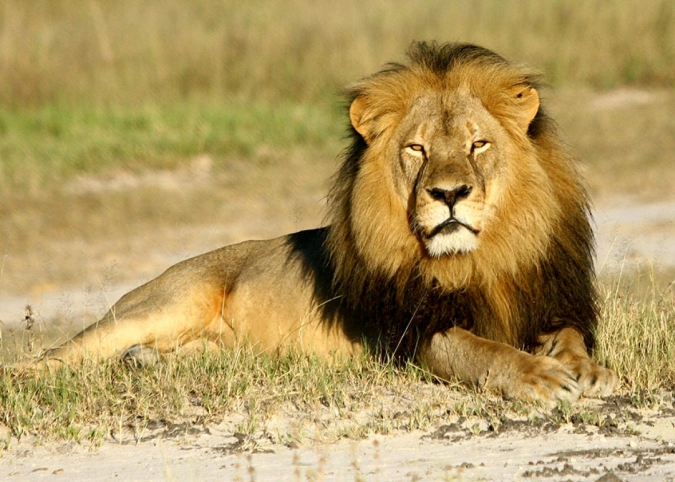 Cecil, Zimbabwe’s most famous lion, was illegally hunted and killed by an American dentist, sparking outrage across the world

However, believe it or not, this goes against the feeling of many conservationists and pundits who hold Namibia up as a shining example of trophy hunting making a significant contribution to conservation of wildlife. Hunting certainly played a vital role in rebuilding Namibia’s game stocks after they were largely decimated during the Border War of the 70s and 80s. Today there are still 80 conservancies in Namibia that rely entirely on funds from hunting.

Namibia’s current Minister of Environment and Tourism, Pohamba Shifeta, went so far as to say that airlines banning the transport of trophies from the country would be “the end of conservation in Namibia”.

This should perhaps encourage us to cast our minds back to another hunting controversy that dominated world headlines earlier this year: American Corey Knowlton’s hunt of an old and infertile male black rhino in Etosha National Park back in May, which was filmed by CNN.

Like Cecil’s killer, Mr Knowlton was vehemently attacked on social media, but has stood by claims that his hunt would benefit the conservation of the endangered black rhino species, which is particularly threatened by the scourge of poaching that is ravaging national parks across southern Africa. With regards to the rhino that Knowlton shot and killed, Namibian officials maintained that it was a threat to other fertile rhinos in the herd, while the IUCN pointed out that “well-managed trophy hunting has little to do with poaching, and indeed can be a key tool to help combat it.

As I have written elsewhere, there are certainly some convincing arguments for the positive conservation impact that trophy hunting can have in theory. However, in practice the potential benefits are often negated by poor adminstration, lack of transparency and corruption.

According to seasoned Namibian conservation journalist John Grobler, Namibia’s longstanding hunting heritage has been tarnished by “unethical” and “dishonest” operators and the Ministry of Environment and Tourism’s unwillingness to cooperate with the local hunting association body in their attempts to remove the “bad apples”.

Corruption and bad adminstration in the Minsitry of Environment and Tourism have certainly also contributed to the dramatic spike in poaching in Namibia in the past 12 months or so.

An endangered black rhino in Etosha

So in light of all of this, does trophy hunting still have a role to play in Namibia, or is it, as a Regional Director of the International Fund for Animal Welfare put it, “a philosophy that has no place in modern conservation”?

Grobler believes trophy hunting of certain species remains important for Namibia. “Farmers look better after their game if they can sell those to hunters,” he says. Many parts of Namibia are also currently experiencing a drought. According to Grobler, this means that numbers will have to be reduced, or the game will starve.

“Better to hunt them then than let then die of hunger against a fence somewhere. We’re now in a third year of drought and the game on many farms are in poor condition; competition between males getting nastier and many people losing game they bought at huge expense to those factors. There would be no point for any farmer to have lots of game but go bankrupt – so better to hunt them selectively than let the whole herd die”.

Speaking with regards to Botswana’s much-lauded ban on hunting versus the Namibian context, Grobler says that “the difference is that in Botswana, the farms are not all fenced off as in Namibia and therefore the game can move to better grazing in times of drought. While I would prefer the Botswana model, that simply won’t work here any more.”

But even the President of the Namibia Professional Hunting Association Kai-Uwe Denker acknowledges there is a need for considerable self-reflection and reform in Namibia’s hunting fraternity. The “sustainable use” theory has become one of “sustainable abuse”, and a “serious crisis for trophy hunting has arisen” to the extent where “it might well be a question of all hunting coming to an end”. He goes on:

“It is high time that we hunters for once take our fate into our own hands and distance ourselves from unacceptable practices and explain ourselves well . . . For once those breeders and dealers and rogue outfitters who, for greed alone, have commandeered the honest intentions of of the sustainable use principle and ethical hunting standards, should step back.”

It bears remembering that trophy hunting, whether of the “sustainable” variety or not, is certainly not the main killer of Africa’s most revered beasts. Substantially more deaths are attributable to habitat encroachment, human wildlife conflict and poaching.

Nevertheless, at the moment it seems that hunters’ and hunting operators’ attempts to “explain themselves well” will largely fall on deaf ears. The general public is calling for change, and for the boycotting of any countries that continue to allow trophy hunting, whether or not they know what form change may take, or what impact boycotts or blanket hunting bans might have on the wildlife they claim to care so much about it.

Unless Namibia can curb the scourge of poaching, reign in the renegade hunting operators and ensure that local communities benefit more substantially from hunting, it seems that the hunters’ days are numbered. Personally, I’ve never understood the appeal of trophy hunting and I won’t miss it, but in Namibia, whether or not the wildlife will might be a harder question to answer than many of us assume.