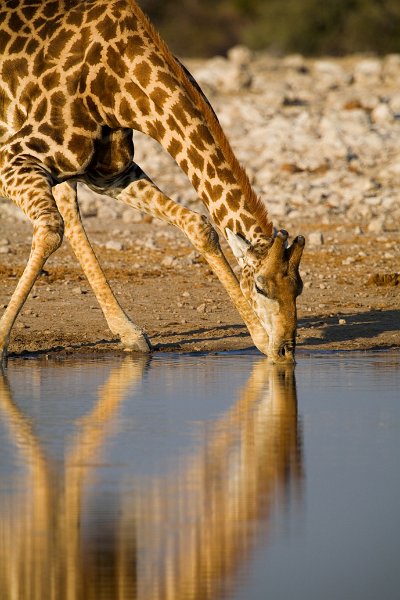 Anyone who has seen a giraffe drink knows it’s a funny sight, and rather an awkward-looking procedure for the giraffe. But how many of us have really thought about how it’s even possible for this giant to get water all the way up that long neck and into its stomach?

Philippe enlisted the help of scientist Dale Taylor to find out more.

After much careful consideration, the scientists concluded that it is done using a combination of pumps in the animal’s neck.

Here’s what they discovered:

‘The giraffe’s lips form one valve of the “pump” while the animal’s epiglottis, located at the back of the mouth, is the other.

‘To start, the giraffe sinks its puckered lips into the water and then pulls back its jaw, allowing water to rush into the mouth, all the while keeping the epiglottis “valve” closed. Next, the giraffe clenches its lips and relaxes the epiglottis, then pumps its jaw so that the captured water is pushed into esophagus.

‘The cycle repeats, moving more and more water into the esophagus. At some point, the giraffe lifts its neck, and the water sluices into its stomach, thanks to gravity and the wave-like muscular contractions known as peristalsis.’