An early alarm and a good dose of caffeine kick-started my morning as we began the 450km journey from Windhoek to Etosha.  We are on one of the long straight roads that slice through the Namibian landscape, somewhere between “Oka-something” and “Otj-another”. 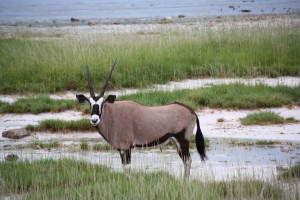 We are in the Otjozondjupa Region, where all towns seem to start with an “Oka” or “Oma” and end with something that I can’t seem to get my tongue around! Recharged with Wimpy coffee I can now concentrate on the week ahead of us…

I have visited Etosha once before, a year and a half ago, just after a very wet rainy season.  The pan looked like a lake and the green vegetation provided the animals with refuge from the stalking tourists.  It looked nothing like what I expected from the pictures I had seen.   Etosha is infamous for its dusty, white elephants standing out amongst crowds of animals queuing, waiting their turn around the waterholes.

This past year has been a particularly dry one for Namibia so Etosha promises to be “picture-perfect”.  Recent conversations with travellers, who have just been to the park, have been punctuated with sightings of 20 black and white rhino drinking from the Okaukeujo Waterhole, leopards with cubs and hungry lions lurking around the waterholes choosing from the smorgasbord of thirsty game. Recently it has been discovered that rhino descend on the waterholes in Etosha en masse, in the dead of night, to meet and communicate with one another – taking the phrase “let’s meet at local watering-hole” to a whole new level!

That’s all for now… I will keep you posted on the journey ahead.