With the terrible scourge of rhino poaching continue to ravage South Africa’s national parks, neighbouring Namibia offers a welcome break from all the needless bloodshed. Almost unaffected  by poaching for the last two decades or so, Namibia currently boasts the largest population of black rhino in the world, most of which are found in the beautiful and vast expanses of Etosha National Park.

In fact, numbers of this more endangered and notoriously shy rhino species are actually on the increase within the park, a fact that most recent visitors would likely be able to attest to. Even in the wilder and less inhabited western parts of the park around the exclusive Dolomite Camp, successful breeding programmes have led to increased black rhino sightings in this region.

But the best way to view these incredible creatures inside Etosha is generally at one of the much-feted floodlit waterholes at camps closer to the Etosha Pan, particularly the one at Okaukuejo Camp. The recent BBC documentary series ‘Africa’ screened “new” footage of a number of black rhino interacting at what David Attenborough dubbed “secret parties” around the edges of this waterhole, a sight that again many visitors to Etosha might well have already been familiar with.  Sightings at these waterholes are particularly common during the dry season, roughly from May until October. 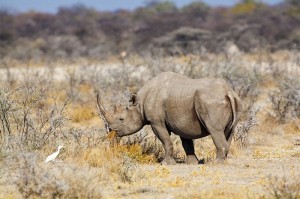 While Namibian conservation efforts have been widely lauded, many conservationists are quick to reiterate that it may well only be a matter of time before South Africa’s problems head northwards across the border. While we all hope that they will come to be proved wrong, there’s still no time like the present to see the beautiful black rhino thriving within Etosha. The more people that are lucky enough to see these rhino in all their glory now, the more they should be moved to make sure they are still there in abundance for future generations to enjoy.