While the abundance of the Big 5 not surprisingly tends to be the main draw for most visitors to Etosha, the wetter, greener and less busy summer months are a bird lover’s dream.

The park plays home to more than 340 species of bird, both local and migratory, with most being found in their greatest numbers on and around the Etosha Pan when it becomes filled with water during the summer season, roughly from November until April.

In particularly wet years, more than a million flamingos have been counted here, and the pan is one of only two breeding areas for this bird in the whole of Southern Africa. Other regular visitors to the area in summer include white pelicans, egrets, weavers and a variety of different storks and cranes. Aside from the Etosha Pan itself, many of the park’s waterholes and smaller pans are also full to the brim and teeming with birdlife at this time of year, and are all good places to sit with binoculars and long lens at the ready.

Apart from this, Etosha boasts 46 species of raptors that can be seen throughout the year – including a few different species of vulture, kestrels and 12 species of eagle – as well as a number of other open country species, both large and small, including the kori bustard and the rare yellow-throated sand grouse. 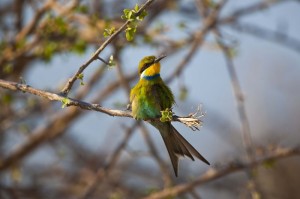 The lush green summer vegetation and beautiful watery expanse of the pan offer great backdrops and make for fantastic bird images, and you won’t have to worry about too many other cars around to scare the birds away. So while big game viewing might be less rewarding in summer, bird watching is a winner.