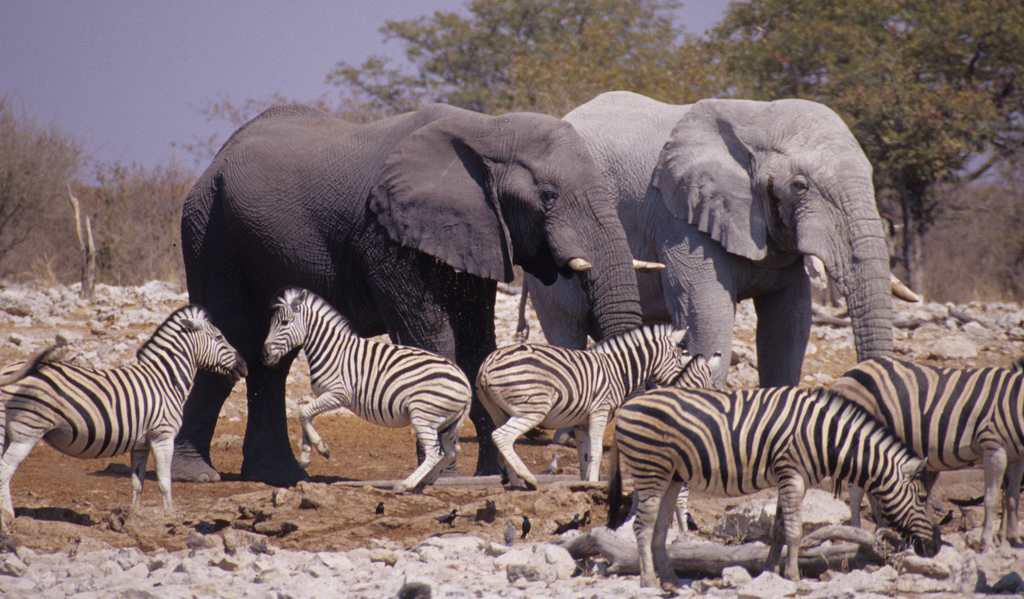 With the start of each New Year, Namibia becomes increasingly ever-present on the ubiquitous lists of “must visits” for the year ahead. Anyone that’s been lucky enough to visit Namibia before knows the wealth of attractions and the sheer wonder of the place. The unique and awe-inspiring Etosha National Park is often cited as Namibia’s primary drawcard, and not without good cause. Here are five reasons to make a trip to this magical place your number one New Year’s resolution for 2016:

The sheer abundance of game

Above all else, Etosha is known for its wealth of big game. Four of the Big 5 are present and regularly sighted (elephant, rhino, leopard and lion); other favourites include giraffe, cheetah, hyena and gemsbok. Overall, the park is home to a staggering 114 mammal species, as well as 340 bird species. It’s one of the best places in Africa to spot black rhinos and the elephants are among the biggest you’ll see anywhere. During the dry season, the life-giving waterholes draw a veritable carnival of wildlife to drink together.

Etosha’s most well-known feature is the vast salt pan that is found at its heart, which is so big it can be seen from space. The moon-like surface of the Etosha Pan also provides striking vistas and breathtaking backdrops to your game-viewing and wildlife or landscape photographs. In the wetter summer months, the pan can fill with water and become a shimmering oasis for birdlife. The wild western section of the park, which has only recently been opened to the public, is greener and hillier, and certainly no less beautiful. The sunsets and starry skies over the vast, open landscapes of Etosha are quite the spectacle.

Etosha remains considerably more affordable as a safari destination than many of its regional contemporaries. There are various budget accommodations inside the park that are good value for money and have plenty of amenities, while even some of the more luxury offerings shouldn’t break the bank. You can also save money by self-driving, and you won’t require a 4×4, so rent a sedan if you want to save some more dollars.

Though Etosha’s vast and often barren landscapes give it an air of remoteness, you’d in fact be hard-pushed to find many more accessible parks anywhere in Africa. The park is an easy five hour drive on good and well-signposted roads from the Namibian capital and transport hub of Windhoek. In Etosha itself, the roads and tracks are well-maintained and, as mentioned above, almost all are navigable without a 4×4. Self-driving is allowed, and maps can be picked up at the gates. Many of the best waterholes, where much of the game congregates in the dry winter months, are easily accessible and found just off the main drags.

The chance to explore beyond the park

While this list has shown that Etosha itself has so much to offer, the park also lies in close proximity to many other Namibian must-sees. The dramatic and aptly-named Skeleton Coast isn’t far away, and the new Omulunga Palm Route, which takes in a number of Namibia’s cultural highlights and lesser-known gems, passes through Etosha. Kaokoland hugs the west of the park and is known for it’s free-roaming black rhino and desert-dwelling elephants.